We can't have July go by without the Aha! International theatre for children at Rangashankara....now can we? On its tenth year, we literally camped at Rangashankara watching a play every day between July 14th to 20th. Thankfully, there were a couple of plays that Abhay could watch unlike last year which was exclusively for toddlers. However, there has been a increasing tendency favouring the younger lot, with most plays having minimal or no language at all or gibberish meant for very young kids, and a note of suggestion would be to include a play or a performance with dialogues impressing upon the tweens or adolescents too! Anyway, a play a day sure keeps dreariness away (so needed for our routine driven lives)........also devices away (so needed for this generation) ........and jadedness away (so needed for everyone today) ...and of course making a play a day happen for your kids on weekday evenings sure keeps you on your toes...so much so that it took me this long to recover from the hectic schedule of the Aha! week.....and it's only today that I found time to write about it! 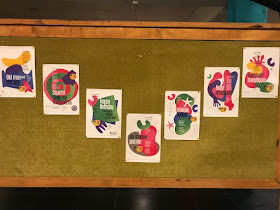 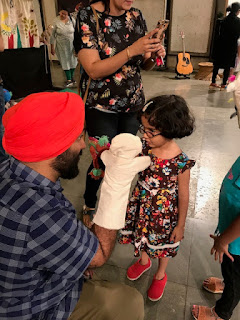 Well.......better late than never, so here is my must-post event of the month.....and this year was all the more special as it was the tenth edition of the Aha! International theatre festival for children that has spread it creative tentacles to the likes of Hyderabad and Ahmedabad. With plays from children's theatre groups from various parts of the world including the US, UK, Germany, and Korea. etc, catering to children aged 4 and above, and performances ranging from puppetry to adapted novellas, from shadow plays, to creative inter play of mime and animation, from no language at all to the universal language of creativity and imagination, the  Rangashankara's Aha festival has come to symbolise one of the most stimulating, nuanced, inclusive and inspiringly creative events for children that Bangalore and Bangaloreans are proud to call their own! 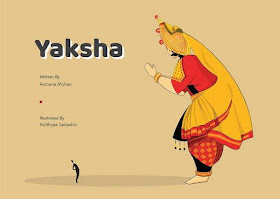 The Aha! festival has always provided a platform to interesting events that prelude the play of the day,  and this year it opened with a launch of a book  titled "Yaksha" by Archana Mohan and illustrated by Adithya Sadashiv. Being a collaboration between Bookosmia and Yakshadegula, this book is a wonderful way to introduce children to Karnataka's indigenous dance form, Yakshagana, that is particularly popular in our native South Kanara district. Narrated through the perspective of the eight year old Yaksha,  who finds himself unhappy over many things, be it being new to school or his unusual name that always gets turned into "Yucky" or "Yucks" or his lack of friends or as he considers himself to be a back-bencher with no special talent thus making Yaksha suffer through a  low phase in his school life. On "Be your own superhero day" at school,  Yakhsa  is reluctant to participate as he is too jaded to believe in Super heroes. But as his father and grandmother take him through the story of his great great great great grandfather also named Yaksha who fought to perform mythological stories before the general public, through the medium of the unique dance-drama-art.  So Yaksha,  in his search of a 'super-hero"  goes on to  draw inspiration from his own family tradition that he sets out to reclaim and make it into his own. A beautiful  coming of age tale that encapsulates a melange of  themes -from a contemporary story line of a boy trying to fit in, to the past glory of a dying tradition, guided by subtle yet strong support from family and elders to finally finding your own destiny, all through  interwoven with informative aspects of one of most vibrant dance-drama forms of Karnataka.....truly makes you go "Aha!" with delight!